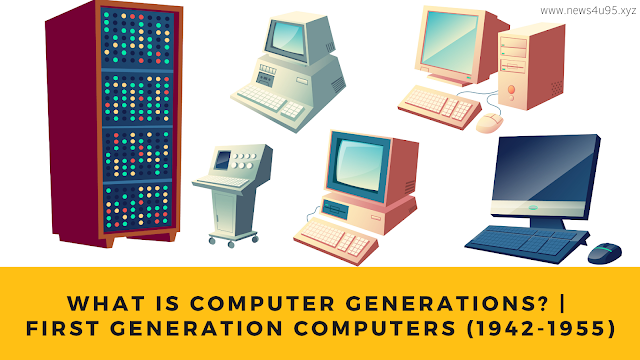 “Generation” in computer talk provides a framework for the growth of the computer industry based on key technologies developed. Originally, it was used to distinguish between hardware technologies but was later extended to include both hardware and software technologies.

The custom of referring to the computer era in terms of generations came into wide use only after 1964. There are totally five computer generations known today. Below we describe each generation along with its identifying characteristics. Although there is some overlap between different generations, the approximate period shown against each is normally accepted.

In the description below, you will come across several new terminologies. Subsequent chapters will deal with these terminologies in detail. The idea here is to provide an overview of the major developments and technologies during the five generations of computers and not to explain them in detail. Hence, this section provides an overview of what you are going to learn in this entire book.

Most of the first generation computers worked on the principle of storing program instructions along with data in the 9nerriory of computer (stored Program concept) so that they could automatically execute a program without human intervention. The memory of these computers used electromagnetic relays, and users fed all data and instructions into the system using punched cards. Programmers wrote instructions in machine and assembly languages because of the lack of high-level programming languages in those days. Since machine and assembly languages are difficult to work with, only a few specialists understood how to program these early computers.

Characteristic features of first generation computers are as follows:

They were the fastest-calculating devices of their time.

They were too bulky in size, requiring large rooms for installation.

First generation computers used thousands of vacuum tubes that emitted a large amount of heat and burnt out frequently. Hence, the rooms/areas in which these computers were located had to be properly air-conditioned.

Each vacuum tube consumed about half a watt of power. Since a computer typically used more than ten thousand vacuum tubes, the power consumption of these computers was very high.

As vacuum tubes used filaments, they had a limited life. Because a computer used thousands of vacuum tubes, these computers were prone to frequent hardware failures.

Due to the low mean time between failures, these computers required constant maintenance.

In these computers, thousands of individual components were assembled manually by hand into electronic circuits, Hence, Commercial production of these computers was difficult and costly.

Since these computers were difficult to program and use, they had limited commercial use.

Q 1. Which electronic components are used in first generation computers?

What is Computer and Characteristics of Computer