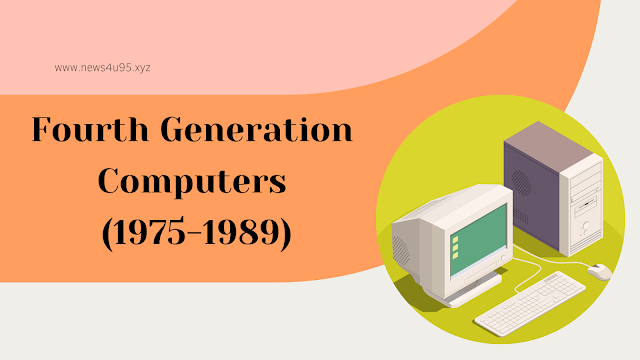 The fourth generation computers built between 1975-1989. The average number of electronic components packed on a silicon chip doubled each year after 1965. This progress soon led to the eta of large-scale integration (LSI) when it was possible to integrate over 30,000 electronic components on a single chip, followed by very-large-scale integration (VLSI) when it was possible to integrate about one million electronic components on a single chip. This progress led to a dramatic development-creation of a microprocessor. A microprocessor contains all circuits needed to perform arithmetic logic and control functions, the core activities of all computers, on a single chip. Hence, it became possible to build a complete computer with a microprocessor, a few additional primary storage chips, and other support circuitry. It started a new social revolution-personal computer (PC) revolution, Overnight computers became incredibly compact. They became inexpensive to make, and suddenly it became possible for many to own a computer.

By 1978, the Apple 11 from Apple Computer Inc. and the TRS-80 model from the Radio Shack Division of Tandy Corporation were dominant personal computers. By 1980, IBM realized that the personal computer market was too promising to ignore and came out with its own PC in 1981, popularly known as IBM PC. Several other manufacturers used IBM’s specifications and designed their own PCs, popularly known as IBM-compatible PCs or clones. The IBM PC and its clones became a popular standard for the PC industry during the fourth generation.

Significant advancements also took place during the fourth generation in the area of large-scale computer systems. In addition to improved processing and storage capabilities of mainframe systems, the fourth generation saw the advent of supercomputers based on parallel vector processing and symmetric multiprocessing technologies. A supercomputer based on parallel vector processing technology contains a small number of custom-designed vector processors which are connected to a number of high-speed data access shared memory modules through a custom-designed, high-bandwidth crossbar switch network.,-On the other hand, a supercomputer based on symmetric multiprocessing technology uses commodity microprocessors connected to a shared memory through a high-speed bus or a crossbar switch network. Primary builders of supercomputers of the former category included Cray Research and ETA Systems, whereas of the latter category included IBM, Silicon Graphics, and Digital Equipment Corporation.

High-speed computer networking was also developed during the fourth generation. This enabled interconnection of multiple computers for communication and sharing of data among them. Local area networks (LANs) became popular for connecting computers within an organization or within a campus. Similarly, wide area networks (WANs) became popular for connecting computers, located at larger distances. This gave rise to networks or computers and distributed systems.

On the software front, several new developments emerged to match the new technologies of the fourth generation. For example, vendors developed several new operating systems for PCs. Notable ones among these, were MS-DOS, MS-Windows, and Apple’s propriety Mac OS, Since PCs, were for individuals who were not computer professionals, companies developed graphical user interfaces for making computers more user-friendly (easier to use). A graphical user interface (GUI) provides icons (pictures) and menus (list of .choices) that users can select with a mouse. PC manufacturers and application software developers developed several new PC-based applications to make PCs a powerful tool. Notable among these were powerful word processing packages that allowed easy development of documents, spreadsheet packages that allowed easy manipulation and analysis of data organized in columns and rows, and graphics packages that allowed the easy drawing of pictures and diagrams. Another very useful concept that became popular during the fourth generation was that of multiple windows on a single terminal screen. This feature allowed users to see the status of several applications simultaneously in separate windows on the same terminal screen.

During fourth-generation, the UNIX operating system also became very popular for use on large-scale systems. Additionally, due to the proliferation of computer networks, several new features were included in existing operating systems to allow multiple computers on the same network to communicate with each other and share resources.

Characteristics of fourth generation computers are as follows:

Q 1. Which electronic components are used in fourth generation computers?

VLSI: thousands of transistors on a single microchip.