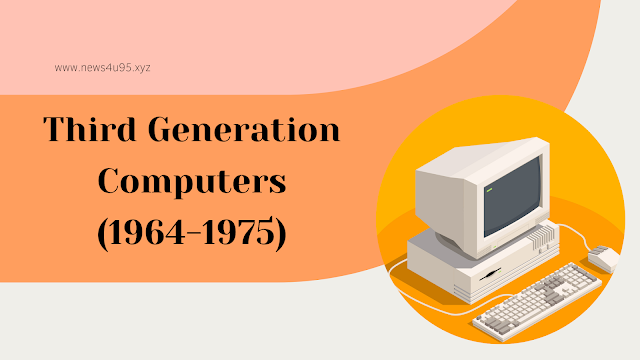 On the software front, standardization of high-level programming languages, timesharing operating systems, unbundling of software from hardware, and creation of an independent software industry happened during third generation. FORTRAN and COBOL were the most popular high-level programming languages in those days. American National Standards Institute (ANSI) standardized them in 1966 and 1968 respectively, and the standardized versions were called ANSI FORTRAN and ANSI COBOL. The idea was that as long as a programmer follows these standards in program writing, he/she could run his/her program on any computer with an ANSI FORTRAN or ANSI COBOL compiler. Some more high-level programming languages were introduced during the third-generation period. Notable among these were PL/1, PASCAL, and BASIC.

Second generation computers used batch operating systems. In those systems, users had to prepare their data and programs and then submit them to a computer centre for processing. The operator at the computer centre collected these user jobs and fed them to a computer in batches at scheduled intervals. The respective users then collected their job’s output from the computer centre. The inevitable delay resulting from this batch processing approach was very frustrating to some users, especially programmers because often they had to wait for days to locate and correct a few program errors, To rectify this situation, John Kemeny and Thomas Kurtz of Dartmouth College introduced the concept of timesharing operating system.

The timesharing operating system enables multiple users to directly access and shares a computer’s resources simultaneously in a manner that each user feels that no one else is using the computer. This is accomplished by using a large number of independent, relatively low-speed, online terminals connected to the computer simultaneously. A separate user uses each terminal to gain direct access to the computer. Timesharing operating system allocates CPU time in such a way that all user programs have a brief share (known as a time slice) of CPU time in turn. The processing speed of the CPU allows it to switch from one user job to another in rapid succession and execute a small portion of each job in the allocated time slice until the job is completed. Each user gets the illusion that he/she alone is using the computer. The introduction of the timesharing concept helped drastically improve the productivity of programmers and made online systems feasible, resulting in new online applications hip airline reservation systems, interactive query systems, etc.

Until 1965, computer manufacturers sold their hardware along with all associated software without separately charging for software. For example. buyers received Language translators for all languages supported on a computer they purchased. From the user’s standpoint, the software was free. However, the situation changed in 1969 when IBM and other computer manufacturers began to price their hardware and software products separately. This unbundling of software from hardware gave users an opportunity to invest only in the software of their need and value. For example, now buyers could purchase only the language translators they needed, and not all language translators are supported on the purchased computer. This led to the creation of many new software houses and the beginning of an independent software industry.

Another important concept introduced during the third generation was that of the backward-compatible family of computers. During this period, IBM introduced its System 360 as a family of computers with backward compatibility as they were different sizes of mainframe systems based on the same machine language. This enabled businesses to upgrade their computers without incurring the costs of replacing peripheral equipment and modifying programs to run on new systems.

Development and introduction of minicomputers also took place during the third generation. Computers built until the early 1960s were mainframe systems that only very large companies could afford to purchase and use. Clearly, a need existed for low-cost smaller computers to fill the gaps left by the bigger, faster, and costlier mainframe systems. Several innovators recognized this need and formed new firms in the 1960s to produce smaller computers.

Digital Equipment Corporation (DEC) introduced the first commercially available minicomputer, the PDP-8 (Programmed Data Processor), in 1965. It could easily fit in the corner of a room and did not require the attention of a full-time computer operator. It used a timesharing operating system and a number of users could access it simultaneously from different locations in the same building. Its cost was about one-fourth the cost of a traditional mainframe system making it possible for smaller companies to afford computers. It confirmed the tremendous demand for small computers for business and scientific applications, and by 1971, there were more than 25 computer manufacturers in the minicomputer market.

Characteristics of Third Generation Computers Are As Follows:

They were more powerful than second generation computers. They were capable of performing about 1 million instructions per second.

They had faster and larger primary and secondary storage as compared to second-generation computers.

They were general-purpose machines suitable for both scientific and commercial applications.

Their manufacturing did not require manual assembly of individual components into electronic circuits resulting in reduced human labour and cost involved at the assembly stage. Hence, commercial production of these systems was easier and cheaper. However, highly sophisticated technology and expensive setup were required for the manufacture of IC chips.

Standardization of high-level programming languages allowed programs written for one computer to be easily ported to and executed on another computer.

Timesharing operating systems allowed interactive usage and simultaneous use of these systems by multiple users.

Timesharing operating system helped drastically improve the productivity Of programmers cutting down the time and cost of program development by several folds.

Timesharing operating systems also made systems feasible resulting in the usage of these systems for new online applications.

Unbundling software from hardware gave users of these systems an opportunity to invest only in the software of their need and value.

Q 1. Which language was used in third generation computers?

Q 2. Which electronic components are used in third generation computers?