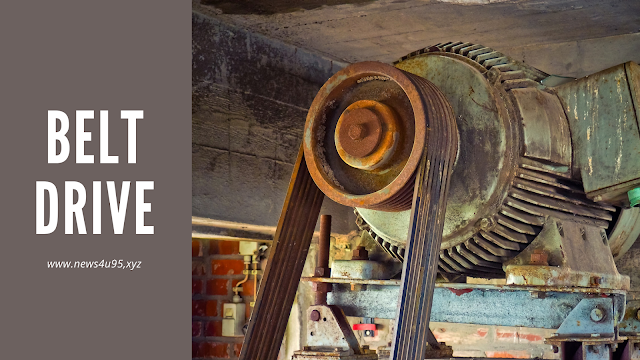 In this article, we learn what is belt drive and the types of belt drive.

What is Belt Drive?

The belt drive is used to transmit power from one shaft to another shaft by using pulleys that rotate at the same speed or at different speeds.

A belt drive consists of the following three elements:

The power is transmitted from the driving pulley to the driven pulley because of the frictional grip between the belt and pulley surface.

Speed ratio or velocity ratio is defined as the ratio between the speed of the driver and the driven shaft.
Generally, the speed ratio is given by

t = Thickness of belt in mm

If the thickness of the belt is considered then, Speed ratio = n/N = D+t/d+t

It is used when both, the driving and driven shaft are arranged in parallel and rotating in the same direction

Normally, the tight side of the belt should be the lower one, especially when the distance between the two shafts Is large.

It is used when both the driving and driven shaft are arranged in parallel, but rotating In opposite directions.

This arrangement provides increased frictional contact between the belt and pulley.

It is prone to excessive wear at a point where the belt crosses and rubs against each other.

It is used for low-speed applications.

It consists of an open belt-drive with an idler pulley.

The idler pulley causes an increase in frictional contact between the belt and the driving pulley.

It is used to obtain high-velocity ratio and high belt tension.

The position of the Idler pulley can be changed to increase the belt tension.

It is used when power is transmitted from one shaft to another through a number of intermediate pulleys.

It provides a high reduction ratio.

Belt-drive can be used for long center distances.

As belts are flexible, they possess the capacity to absorb shocks and vibrations.

For belt-drive, lubrication is not required.

Belt-drive is not affected by dust and dirt.

Belt-drive does not require precise alignment of the shaft and pulley.

Belt-drive is relatively cheap and easy to maintain.

Some of the belts have low power transmitting capacity.

As compared to gear drives, belt drives have a shorter life.

The belt-drive is not a positive drive.

What is Brake and Types of Brakes