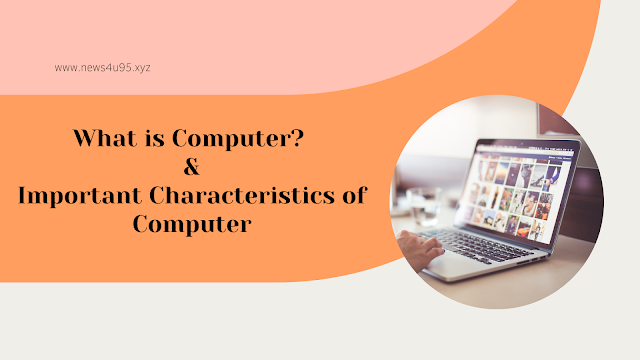 In this article, we discuss what is computer and its characteristics of computer.

The word “computer” comes from the word “compute”, which means, “to calculate”. Hence, people usually consider a computer to be a calculating device that can perform arithmetic operations at high speed. Although the original objective of inventing the computer was to create a fast calculating device, we now define the computer as a device that operates upon data because more than 80% of the work done by today’s computers is data processing.

Data can be anything like bio-data of applicants when the computer is used for shortlisting candidates for recruiting; marks obtained by students in various subjects when used for preparing results; details (name, age, sex, etc.) of passengers when used for making airline or railway reservations; or a number of different parameters when used for solving scientific research problems, etc. Notice from the examples that data can be either numerical, non-numerical, or a mixture of both.

A computer is often referred to as a data processor because it can store, process, and retrieve data whenever desired. The name data processor is more inclusive because modern computers not only compute in the usual sense but also perform other functions with data that flows to and from them.

For example, data processors may gather data from various incoming sources, merge (the process of mixing or putting together) them all, sort (the process of arranging in some sequence — ascending or descending) them in the desired order, and finally print them in the desired format. Notice that none of these ‘operations involves arithmetic computations in the usual sense but a computer is the most suitable device for performing them.

What are the Characteristics of Computer System?

The increasing popularity of computers has proved that it is a very powerful and useful tool. The power and usefulness of this popular tool are mainly due to its following characteristics of computer.

An automatic machine works by itself without human intervention. Computers are automatic machines because once started on a job, they carry out the job (normally without any human assistance) until it is finished. However, computers being machines cannot start themselves and cannot go out and find their own problems and solutions. We need to instruct a computer using coded instructions that specify exactly how it will do a particular job. Some of the other characteristics of computers (such as speed and accuracy) are because they are automatic and work on a problem without any human intervention.

A computer is a very fast device. It can perform in a few seconds, the amount of work that a human being can do in an entire year if he/she worked clay and night and did nothing else. In other words, a computer can do in a few minutes what would take a man his entire lifetime.

While talking about the speed of a computer we do not talk in terms of seconds or even milliseconds (10-3) but in terms of microseconds (106), nanoseconds (I0-9), and even picoseconds (10-12). A powerful computer is capable of performing several billion (109), even trillion (1012), simple arithmetic operations per second.

In addition to being very fast, computers are very accurate. The accuracy of a computer is consistently high and the degree of its accuracy depends upon its design. A computer performs every calculation with the same accuracy.

However, errors can occur in a computer. These errors are mainly due to human rather than technological weaknesses. For example, errors may occur due to imprecise thinking by a programmer (a person who writes instructions for a computer to solve a particular problem) or incorrect input data. We often refer to computer errors caused due to incorrect input data or unreliable programs as garbage-in-garbage-out (GIGO).

Unlike human beings, a computer is free from monotony, tiredness, and lack of concentration: It can continuously work for hours without creatin9 any errors and without grumbling. Hence, computers score over human beings in doing the routine type of jobs that require great accuracy. If ten million calculations have to be performed, a computer will perform the last one with exactly the same accuracy and speed as the first one.

Versatility is one of the most wonderful things about a computer, One moment it is preparing results of an examination, the next moment it is busy preparing electricity bills, and in between, it may be helping an office secretary to trace an important letter in seconds, All that is required to change its talent is to slip in a new program (a sequence of Instructions for the computer) into it, in brief, a computer is capable of performing almost any task if the task can be reduced to a finite series of logical steps.

As a human being acquires new knowledge, his/her brain subconsciously selects what it feels to be important and worth retaining in memory. The brain relegates unimportant details to the back of the mind or just forgets them. This is not the case with computers. A computer can store and recall any amount of information because of its secondary storage (a type of detachable memory) capability. It can retain a piece of information as long as a user desires and the user can recall the information whenever required. Even after several years, a user can recall exactly the same information that he/she had stored in the computer several years ago. A computer forgets or loses certain information only when a user asks it to do so. Hence, it is entirely up to the user to make a computer retain or forget some information.

A computer is not a magical device. It possesses no intelligence of its own. Its I. Q. is zero, at least until today. It has to be told what to do and in what sequence. Hence, only a user determines what tasks a computer will perform. A computer cannot take its own decision in this regard.

Computers are devoid of emotions. They have no feelings and no instincts because they are machines. Although men have succeeded in building a memory for computers, no computer possesses the equivalent of a human heart and soul. Based on our feelings, taste, knowledge, and experience we often make certain judgments in our day-to-day life whereas, whereas computers cannot make such judgments on their own. They make judgments based on the instructions given to them in the form of programs that are written by us (human beings).

What is Robots and Types of Robots