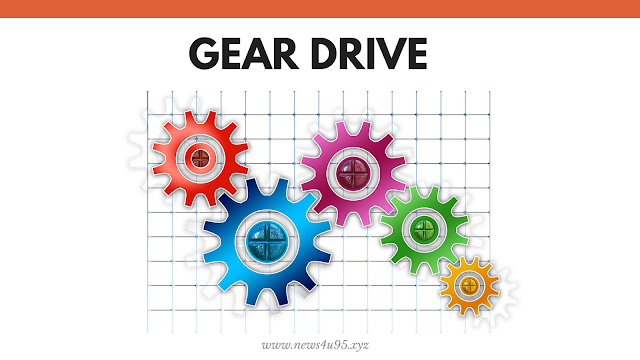 What is Gear Drive?

In the case of belt drive, there is a slipping phenomenon that reduces the speed ratio of a system.

In precision machines or mechanisms like the watch gear mechanism, a definite speed ratio is required which is obtained by gear drive or gear wheels.

Gear drive is a positive drive and it is provided when the distance between the driver and follower is very small.

Gears are defined as toothed wheels which can transmit power and motion from one shaft to another shaft by means of successive engagement of teeth.

It is important to note that, both the gears which are engaged, always rotate in opposite directions.

Speed ratio or gear ratio is defined as the ratio of pinion speed to the gear speed.

dg and dp = Diameter of gear and pinion in mm

Zg and Zp = Number of teeth on gear and pinion

They are the simplest of all gears and the easiest in production.

The teeth of spur gears are cut along the periphery and parallel to the axis of the gear.

Spur gears can be made of steel, brass, other metals, and plastics.

Spur gears are easy to manufacture.

They are made in a variety of sizes from less than 25 mm to several cm in diameter.

These gears are less expensive.

Spur gears are not used for high-speed applications.

The operation of the spur gear is noisy.

A gear train is a combination of two or more gears that are used to transmit motion from one shaft to another shaft.

The gear train is necessary when it is required to obtain a large speed reduction within a small space.

The nature of the gear train used depends on the required velocity ratio and the relative position of the axes of shafts.