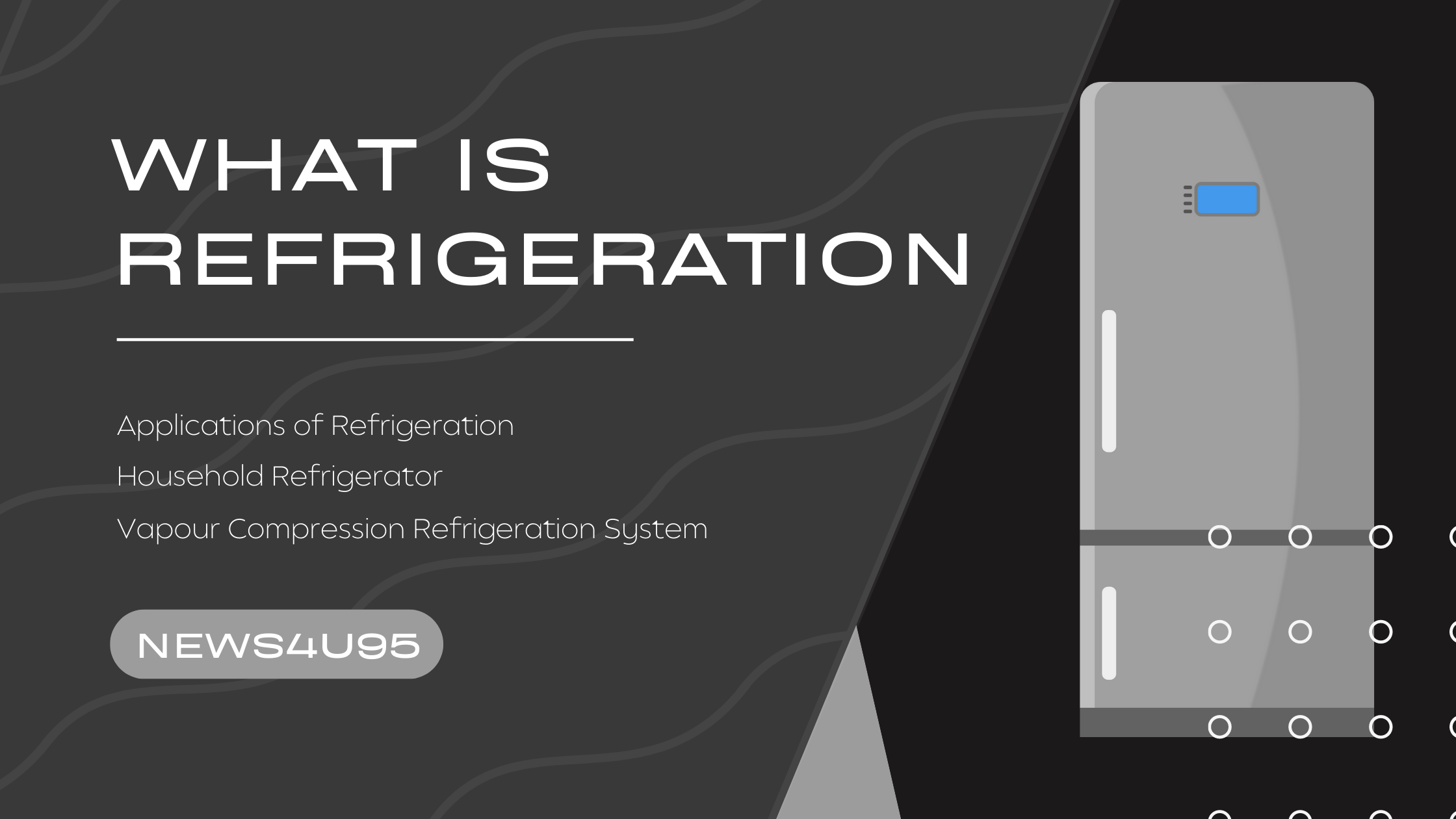 The heat withdrawn from the refrigerated space is rejected to the atmosphere which acts as a natural heat reservoir.

The heat transfer from the system to the surroundings is reduced by providing insulating materials.

Refrigeration can be used in the following areas:

Preservation of foodstuffs, fruits, vegetables, etc. in the storage area or transportation.

Preservation of medicines and blood.

For pre-cooling and pasteurization of milk and in preparation of butter.

The refrigerating effect can be produced by using the following methods:

Out of all these methods, the vapor compression cycle is commonly used for applications like refrigerators, deep freezers, and air-conditioners.

A ton of refrigeration is defined as the quantity of heat required to be removed, to form one ton of ice at 0 °C in 24 hours when the initial condition of the water is 0 °C because the same cooling effect will be obtained by melting the same ice.

S.I. unit of 1 ton of refrigeration is,

In this system, the liquid refrigerant boils in the evaporator which at low pressure, by absorbing latent heat.

The vapours formed are condensed in the condenser which is at high pressure by rejecting latent heat.

Thus, in this cycle heat is transferred in the form of sensible heat as well as latent heat which gives higher COP. During the suction stroke of the compressor, low-pressure vapour in the dry state is drawn from the evaporator. Here, the temperature and pressure of vapour increase until the vapour temperature is greater than the condenser temperature.

During condensation, high-pressure refrigerant vapour enters the condenser where the cooling medium absorbs the heat and converts the vapour into liquid.

After condensation, the liquid refrigerant is stored in the receiver, and from the receiver, it is passed to the evaporator through an expansion or throttle valve. This valve reduces the pressure by keeping the enthalpy constant (Throtting process).

After expansion, the low-pressure liquid refrigerant enters an evaporator where a considerable amount of heat is absorbed by it and converted into vapour. This low-pressure vapour is sucked by the compressor and the cycle repeats.

A household refrigerator is the application of vapour compression refrigeration system

The figure shows the arrangement of household refrigerators. A household refrigerator consists of the following main elements:

In household refrigerators, the condenser is placed on the rear side. The heat transfer takes place through the circulation of air naturally. It is made of tubing of copper.

In the receiver, the refrigerant is stored under high pressure.

In household refrigerators, the capillary tube will acts as a throttle valve where the expansion of refrigerant takes place.

Household refrigerators are commonly equipped with two evaporators. Out of them, one is used for frozen food and the other for regular refrigerating temperatures. But nowadays new models of refrigerators provide much more storage capacity using the same outside dimensions as the older type refrigerators, Modern refrigerators also provide more effective and thinner insulation. Evaporator coils are generally made of aluminum or stainless steel.

The working of household refrigerators is similar to vapour compression refrigeration systems as discussed in the previous section.