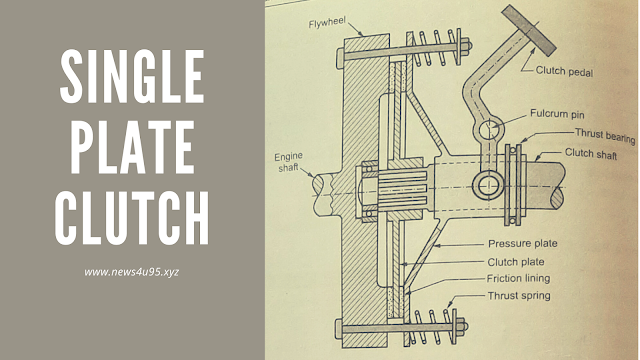 What is Single Plate Clutch?

The single-plate clutch is the most commonly used type of clutch on automobiles.

It consists of a clutch disc, pressure plate, and a cover assembly which is bolted to the engine flywheel.

The construction of major components of a single-plate clutch is as explained below:

Flywheel is a heavy mass disc bolted on the engine crankshaft.

It has a flat surface that engages with the clutch/friction plate.

It is a mechanical disc with friction linings on both sides.

It consists of a central hub machined internally to slide on a splined shaft.

To take care of the torsional vibrations and damping actions, coil springs are mounted radially on the clutch plate.

It is a heavy mass plate with a flat surface on one of its sides that engages with the clutch plate.

Thrust springs are axially mounted in between the clutch plate and pressure plate.

These springs keep the clutch in an engaged position when the pedal position is up.

They are pivoted on a fulcrum pin and it is used to disengage the clutch plate.

It is a sheet metal or forged cover which surrounds the overall clutch assembly and protects it from dirt and dust.

It is the shaft that is connected to the gearbox input shaft.

It is splined near the central hub where the clutch plate can slide.

The thrust bearing takes care of the axial load that comes during the sudden release of thrust springs.

When the pedal position is up, the axial force of thrust springs ensures the pressure plate is pressed against the flywheel with the clutch plate being sandwiched between the two of them.

When the clutch pedal is pressed down, the release lever pulls the pressure plate against the thrust springs.

This loosens the contact between the clutch plate and flywheel and hence the drive gets disengaged from the gearbox.

1. Simple design of construction and working.

3. Gear changing with a single plate clutch is easier.

4. It has better torsional vibration-absorbing capacity.

1. For higher power transmission, the surface area of the clutch plate increases and thereby increasing the overall size of the clutch.

It is used on vehicles wherein space limitations are not severe such as trucks, buses, etc.

What is Clutch and Types of Clutches